Take a look at this poor kangaroo.  When I saw it I thought it might have been diseased and took photos to send to park rangers so they could capture it for treatment to ensure that other roos weren’t going to get infected too. What I found out once showing the photo to the Parks Vic employee was that kangaroo did have an infection, but not from a disease. Rather it was from a dog bite. Note the swollen jaw and torn ear. The poor thing. 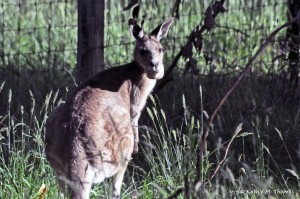 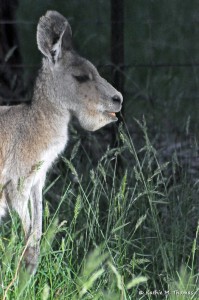 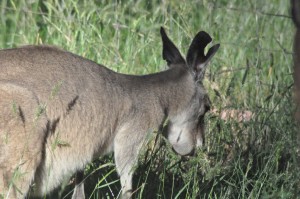 There are signs on our conservation park entrances that dogs are not allowed in the parks, and yet, time after time, whenever I’ve been walking at Lysterfield Lake Park, I’ve frequently seen people walking their dogs in the park on the tracks, often without a leash on. Other times I’ve seen them playing with their dogs on the picnic grounds. What makes them think they can ignore the rules? What makes them think they know better than the rangers who look after the park? The trouble is, the rangers have set working hours and it doesn’t include evenings (in the spring-autumn seasons when it’s still light) or the weekends. Consequently people think they can do anything they like because there is no-one around that they have to answer to. This also includes the enormous amount of rubbish that is just dumped on evenings and weekends at the park.  I’m sure other parks must suffer the same.

The employee I spoke to was busy picking up rubbish left from the previous evening by those who have no respect for the grounds they so freely get to use and not have to pay for.  He was checking out a young kangaroo that was on its own, i.e. no mum nearby, it had been in the water and he was concerned for its health and safety. When I remarked it looked like it had been in the water he said they go into the water for safety when being chased by something, most likely a dog.  I told him then about the roo I’d seen and he asked to see the photos. When he saw it he said the swollen jaw was most likely from a dog bite and he asked where he could find it. I directed him to where I last saw the roo and he went off in search of it.

There have been times when I’ve walked along the dam wall at Lysterfield Lake and seen two large dogs running along the grounds at the base of the wall. I must admit I’ve been concerned for my own safety when no sight of the owner was evident and I didn’t know how safe those dogs might be.

Clearly there are people who don’t give a damn about nature, conservation of nature and the fact that their dogs should be restrained when out of their homes, and not allowed in a conservation park in the first place.