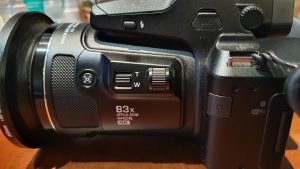 I thought I would do a review, now I’ve been using this camera daily since end of November 2020. So almost 3 months. I’m a birder so it’s natural that most of my images will relate to birds but it’s not just birds you can photograph with it. And I definitely recommend it as a great travel camera.

This is classed as a Bridge Camera with super-zoom. It’s an all-in-one. For those upgrading from a point and shoot, or phone camera, yes, there’s some learning to be done. For those, like me, who are in need of something lighter to carry around all the time, instead of a DSLR and attached lenses, you’ll adjust to it quite quickly.

What do I like about this camera? It’s lightweight – about 1/3 of the weight of what I am used to carrying around with me every day. It has an amazing super-zoom – even more than my 200-500mm heavyweight lens. It has several preset settings but you can also set up your own settings. It’s easy to use. And you can get amazing moon images too, as it has a fantastic moon setting. It’s also quite easy to do videos too.

What don’t I like about this camera? You can’t shoot RAW in all settings, just the M, A, S and P modes. For the other settings, scene (several options), bird, moon, they are all in jpg only. The zoom, when fully extended, is so light, it’s hard to hold it still. Of course, it may still just take time for me to get used to how light it is to hold still. I know it took me 3 months just to get used to holding a 70-300mm still enough for sharp shots a few years back. Or I may just have to consider a monopod or tripod to carry around. We’ll see…

I won’t put the specs here but if you read this post at DPReview it shows you the specs and also comparisons of earlier bridge cameras with super-zooms by Nikon. This is clearly the best yet.

And there is a post here by Robert G Allen showing you what he has found. There was another I read before I made my decision to buy it but can’t find it now – if I do, I’ll add it later.

And this one at Nikon.

My previous post about some Tawny Frogmouths gave you a small example of what could be achieved. But here are more for you.

Now, I’ve tried several modes so far on the camera but my favourite still remains the Bird setting – and not just for birds either. But you cannot adjust the ISO – it does it automatically, based on the lighting, although you can preset the range you want it to operate in. On the whole, it works quite well but if the light is real low, I would have to change to another image setting so I could adjust the ISO to make it higher. That is, the M, A, S or P settings.

I have been building an album with images just from this camera which you can view at Flickr.

Now, to share with you some of the images – distance and close ups. All images have been lightly touched up with Lightroom, i.e. a bit of brightening and/or sharpening, but nothing else. The camera has a 5.6 crop factor  meaning 357*5.6 =2000mm. The camera does 4.3 – 357mm zoom, effectively 24mm-2000mm ultra zoom. But if you use digital zoom it can do double that. Pretty amazing, don’t you think?If you’re looking for a good travel camera, this would fit the bill.

The images below show you what focal point I used for each image.

I took these shots just over week after getting the camera. My husband and I had gone away for a short holiday. In the first shot the square is where the man is and you can see him close up in the second shot. Both images were taken from the same position.

On the same day, these images were taken too, in the same area.

And the close up.

Another day, we visited a wetlands area. Saw my first yellow-billed spoonbills – love seeing ‘firsts’ in my birding. There were two in the distance as you can see marked below.

And the close up of one of them.

A few weeks later my husband and I visited the Blue Lotus Water Gardens in Yarra Junction. I took the P950 with me – I’ve literally been using it every single day so I can get used to it and learn how to best use it. This is of a Reed Warbler. I didn’t get the wide shot but partly zoomed in and then fully zoomed in.

We also took Miss 6 (granddaughter) for her 6th birthday to the Zoo and the lion enclosure has had an upgrade. Looks great and there are now many vantage points to view the animals. But the best viewpoint was through a glass window at the end of the enclosure and the animal was a distance away.

Great for close ups of flowers too.

And fully zoomed in – can’t fit the whole moon in the image.

Ultimately you can say I’m quite happy with this camera. While I’ve yet to achieve good BIF (bird in flight) or other action shots (I’ve got some but not many) and it is a little slow in auto focusing, it more than makes up for it in the ability to get good shots of things close by and at a distance. However Robert G. Allen’s posts I linked above shows BIF and planes in flight shots that he has achieved and I have seen other images where photographers have done it successfully. I hope to as well, over time.  The camera does wide shots, super zoom shots and great in between shots. A good all rounder camera for every day activities and light enough to carry around all day long. Can’t wait to be able to travel again and take this with me!