I got asked today how many cameras I have.  It’s not the first time I’ve been asked that and probably won’t be the last either.

Many years ago I had a little pocket Kodak that just wouldn’t cut it when I was trying to photograph my husband and his team out mountain biking. Then I got booked to speak at a conference in Canada through my Virtual Assistant business for 2009.  It was late 2008 and my husband very kindly researched cameras and got me a Nikon D90 for a Christmas present. So I could photograph his passion but also take photos while we were away in Canada. Was the best thing he could have ever given me but he probably didn’t realise the passion he was firing up in me.

I had that camera for 5 years and literally wore it out. The Camera Clinic told me they couldn’t fix it because the parts were worn out inside and it would be cheaper to buy a new one.  I bought a Nikon D7100, which I still have today and love. Then I had the opportunity to work alongside my photographer idol, Steve Parish, some years back, supporting him in workshops he was running here in Melbourne. The money I earnt from that allowed me to purchase a second camera body, a D7000. By that time I had several lenses and I was finding it tiring swapping lenses on the one camera. Having two meant I could carry them both around at the same time (I use a Q Strap for that), each with a different lens, to assist with both wide and long distance shots.

One year I had booked to attend another conference, this time in New Orleans, but it got cancelled and with the monies I got back I thought I’d purchase my new dream lens, a Nikon 200-500mm lens. A very weighty one but a very good one too. A decision I’ve never regretted.

Over time, the D7100 with the 200-500mm lens became my favourite combination, as I love to get both distant and action shots, mainly birds in flight. However, as I get older, that combination is also somewhat weighty to carry around all the time. Then last year in November (2020) I learnt about the new Nikon P950. I read lots of reviews, looked at example photos and made the decision to get it when it was on special online. It’s a Bridge Camera (all-in-one) with an amazing super zoom, and while I can’t (yet) achieve the amazing BIF shots I can get with the D7100/200-500mm lens combination, I certainly can get some excellent zoomed shots and beautiful scenery shots too (see my review here). It weighs about 1/3rd of the D7100/long lens combo and is fast becoming my favourite lens.

So, currently I have the 3 cameras, the P950 used almost daily, the D7100 now and then but the D7000 is up for sale currently, as I no longer have a need for it. It’s taken around 40,000 photos but is good for around 150,000 photos so still has a lot of life in it yet. I do have it listed on Facebook Marketplace, along with some lenses that I no longer have a need for. I have several other lenses but will probably drop back to just 3 as the P950 pretty much covers what most of my lenses can do. 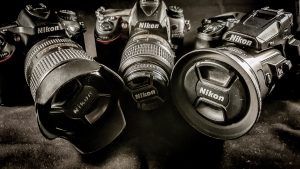 Photos taken with each camera I own.