I was walking along the conservation track at Lysterfield Park yesterday, enjoying the winter morning sunshine, a break from the rain we’d been having in the previous week.  As I neared the end of the track by the gates I was looking around, listening for bird sounds, when I suddenly heard heavy footsteps come to a sudden stop. I looked up, to find just on the other side of the gate a very large Eastern Grey Kangaroo who was probably as equally surprised at my presence in his pathway.  We stood and looked at each other for a few moments. He was very tall, over 6ft and I’m only 5’2.  His nose quivered as he sniffed the air looking at me and I spoke to him and asked if I could take his picture? Which I did, of course, then I asked him if I was in his way? Silly question, of course I was!  I stepped to the side so I was by the fence and away from the gateway and he took his chance to continue forward on his way, bounding across the pathway and into the bush.  I met a lady later that morning who told of her walk and fear of being amongst the kangaroos as many were bounding towards her and around her.  I considered how I would have poised my camera and merrily snapped away had it been me 🙂 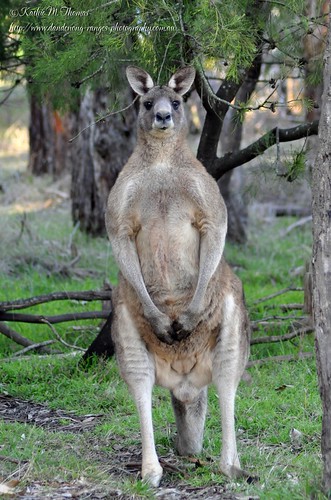 A closeup of the big boy. 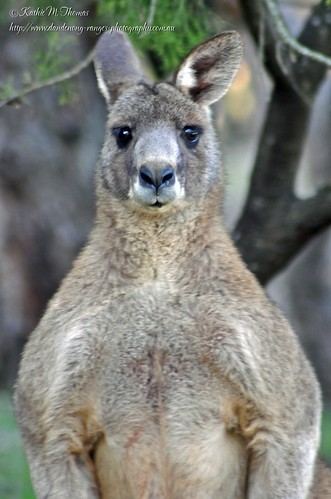 And as he bounded away. I didn’t have my sun hood on my camera which meant the sun did affect this image.