For the past few days we’ve (hubby and I) been hearing a birdcall we’ve not heard here before. Yesterday, when a guest was getting ready to leave my guest and I were commenting on the bird call and speculating on what it might be. A bit like a whip bird, but not quite. As we went out the front door we could tell it was quite close by so I elected to go back in for my camera as she went out the gate.

Not long after I was rewarded by seeing a very bright yellow and black in the leaves of a tree and moved closer to get as many shots as I could. This one is probably the best – pity about the leaves being in the way but you still get a good idea of what it looks like. Very cute, small round and almost fluffy. Could be a young one. There was another bird with the same call over the other side of the road – perhaps the parent? I don’t know.

I did some research at my favourite bird ID website and found it to be a Golden Whistler, Pachycephala pectoralis, which is an insect eating bird. The picture on this website though, doesn’t show the vibrant colour as my own photo does.  Isn’t it a cutie? 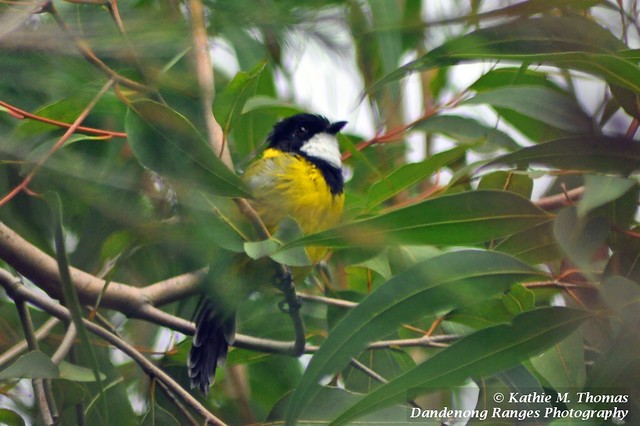