I came home from a business meeting and found this bird under my figtree – I was in the car in the driveway and stopped suddenly to grab my camera to get a shot – so my first shots were blurry. I parked the car in the garage and raced out again and sneaked up towards the bird but it took off and landed in our liquidamber where I was able to get a much better shot.

I thought at first it was a falcon but when looking it up at the birdfinder found it could be either a Brown Goshawk or Collared Sparrowhawk. I suspect it was under our figtree watching the small silvereye that are feverishly eating our figs.  None of our cats were outside otherwise the raptor probably wouldn’t have been on the ground and I wouldn’t have seen it. Very excited – never seen one of these before.  I’ve since had it confirmed it is a Collared Sparrowhawk. 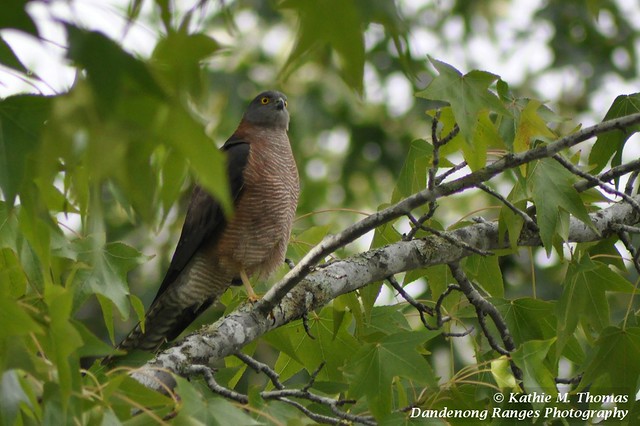 By the way – it’s St Patrick’s Day!  And I have a (green) marquee stall at the Grassroots Market in Upwey today. Why not drop in and say hi?